Whether you are an avid reader or believe the existence of books is solely for film adaptations, there is a book for everyone. Every topic known on this earth has been written about, including space, bananas, romance, swords, kinky boots, and so much more! Below is a tiny sample to encourage an initial toe-dipping venture into the world of books, or simply a new title for the regular reader to discover.

There are so many different types of romance, but one of the best romance hybrids are found in fantasy. An oldie but a goodie is The Princess Bride. Dubbed the “good parts version” of the much longer work by S. Morgenstern, William Goldman presents a brilliant concoction of romance, adventure, pirates, miracles, and comedy. Beautiful Buttercup lives on a farm and passes her day by verbally abusing the farm boy. This farm boy, who merely responds to her abuse with “As you wish”, is actually in love with her and is in fact saying, “I love you”. When Buttercup falls for him also, the farm boy leaves to find his fortune so that they can marry. He never returns, however, and Buttercup hears how he is captured by the Dread Pirate Roberts, who is known to take no prisoners alive. She is then swept up into a tale of intrigue, murder, kidnapping, giants, sword fights, and ultimately, true love.

2. Escape to another planet Set five hundred years in the near future, Koko Takes a Holiday is a decidedly misleading title. This isn’t some charming romance, but a high-octane space thriller. Rude, crude and aggressive, Koko is an ex-mercenary who has retired on a paradise island, running a brothel. This idyllic lifestyle, surrounded by sex and simulated violence, is destroyed for Koko by her old comrade who suddenly wants her dead. On the run from well-paid assassins, Koko ends up on a strange planet that encourages depressed people to commit mass suicide. It isn’t long before the assassins catch up with Koko, triggering heaps of punches, kicks, guns, spaceship collisions, betrayals, deaths, and new friends. This isn’t Koko’s first fight, however, and she’s determined that it won’t be her last.

Darren Shan may be presented as an author for young adults, but his imagination is crackling with life and all things bloody that appeals to everyone. His series, The Demonata, as you can guess from the name, is all about demons. The first book, Lord Loss, is set around teen Grubbs Grady, who comes from a family of avid chess players. But when they all start acting strangely, he grows uneasy, until one night, he finds his family mutilated and torn apart. Emerging from this grusome sight, is the demon Lord Loss, who sends minions to chase Grubbs. An exciting thriller follows, involving intrigue, magic, werewolves, chess, and a lot of demons.

4. Escape into a seedy underworld Out is an aptly named novel for this captivating narrative. Written by Japanese author, Natsuo Kirino, this crime novel is based around four women who want to get out of their boring lives. The four of them work in a bento factory and struggle from day-to-day with abusive husbands, loan sharks, and estranged kids. Yoshie, who has had enough of her husband one night, strangles him to death. In a panic, she goes to the leader of the group, Masaka, for help. Masaka rounds the other three women and together they chop up the deceased husband and spread his parts throughout Tokyo. Unfortunately, a body part is soon discovered and the police are on their trail. As tensions rise, the women’s delicate friendship takes a hit. They begin to blackmail each other, while the police, a mad criminal, and loan sharks determinedly hunt them down. 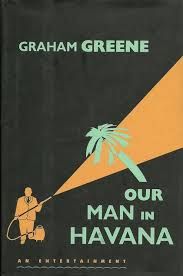 Hilarious satire that makes fun of the intelligence services, who will believe even the most outrageous reports from local informants. Our Man In Havana is set in late 1950s Cuba, and is centred around Mr. Wormold, who sells vacuum cleaners in Havana. One day, a British spy mistakes Wormold to have the potential to be his local informant. Immediately after being propositioned for the role and not having much say in the matter, Wormold is thrown unwillingly into the deadly world of espionage. He begins to create his own spy network, which is wholly made up, and “discovers” plans for a new weapon. The British Services, who pay Wormold for such “truthful” intelligence, are overjoyed by his discovery, and the fact that these plans resemble the inside of a vacuum cleaner is clearly an ingenious enemy decoy tactic.

6. Escape into another reality Kate Daniels’ world is one you hope will never emerge, but deep down you really do hope it will happen. Technology once had full control over the world. Then it reached it’s zenith, causing magic to return and re-balance the world. Now, the world is controlled by the whims of magic waves, during which no technology works. Suddenly, the world has shrunk, as planes and cars are no longer reliable. Wizards and monsters are a regular occurrence, and in the middle of this new chaos is Kate Daniels. A sword-wielding, magic-using mercenary, out to help the city of Atlantic, Kate has a power that she must keep hidden, alongside a past that, should anyone learn of it, needs to be killed immediately, for her own safety and the safety of the entire city.